Somewhere at the back of my mind, lies a distant memory of seeing a movie that goes by a spectacularly whimsical name listed as someone's favourite movie. However, selective memory on the other hand had discreetly deleted how and when the memory came in place.

I just knew I had to catch it when I had the chance, which is what I did last weekend in the wee hours of the morning (Stupid tv station!)

Anyway, besides having a somewhat unconventional story with an interesting cast, what intrigued me most was the idea of erasing something from your memory forever.

As I lay awake after the movie (oh! the regrettable repercussions of mental stimulation!), I was wondering if given the chance to erase anything from my memory, what would it be?

And as I thought and thought (and lost hours of potential sleep in the process) I couldn't think of even one possible item or person I'd like to erase from my memory. If given a chance, would you want to erase any of your memories just so that you could move on?
at April 29, 2008 7 comments:

ONE WORD ONLY - A MEME

A sucker for memes, and as an effort to blog more often because ideas are scattered all over without being able to form proper posts, I thought it would be nice to 'borrow' this meme which I found over at Trav's Thoughts. Besides, it's got this adorable picture attached to it! 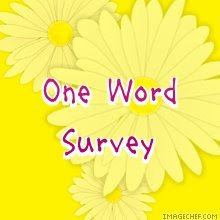 There's only one rule...you only get one word.

Yourself: Tired
Your Partner: Mystery
Your Hair: Black
Your Mother: Monica
Your Father: Retired
Your Favorite Item: iPod
Your Dream Last Night: Hmmm
Your Favorite Drink: Coffee!
Your Dream Car: VW
Your Dream Home: Pretty
The Room You Are In: quiet
Your Fear: Failure
Where Do You Want To Be In 10 Years: away
Who You Hung Out With Last: colleagues
What You're Not: grown
Muffins: game
One of Your Wish List Items: iPhone
Time: afternoom
Last Thing You Did: work
What Are You Wearing: uniform
Your Favorite Weather: stormy
Your Favorite Book: pratchett
Last Thing You Ate: chips
Your Mood: Good
Your Best Friends: Awesome
What Are You Thinking About Right Now: answers
Your Car: kancil
Your Summer: hot
What's on your TV: Nothing
What is your weather like: Sunny
When Is the Last Time You Laughed: Always
Your Relationship Status: Soltera
at April 26, 2008 6 comments:

Email ThisBlogThis!Share to TwitterShare to FacebookShare to Pinterest
Labels: meme

OF THINGS, FUNNY AND OTHERWISE

If it weren't for the lack (or non-existence) of a certain aspect in my life, I think my story would make a pretty good soap, where in the real world rich 'tai-tais'with nothing better to do will watch while their offspring were having peaceful siestas and lament to each other about how terrible that poor girl on tv's life is.

Now for the latest scoop in the dramatic existence of yours truly... just as it reaches one year and a month since the purchase of the laptop, the ethernet port decides to give way. Now that isn't such a big mystery, seeing that I predicted that sooner or later the port was going to meet an early end because it had some fitting issues which I shall not elaborate on here. The only mystery is why does it happen right after my one year warranty period is over? (Of course the port is not covered by the warranty because I don't think it is made by HP, but still...)

On a different note, my usual pair of glasses that I use for work has mysteriously disappeared. I've been meaning to check my eyes and get a new pair because I think my eyesight has deteriorated and the current pair has (ahem!) run out of fashion, but losing the old pair was never my intention. Thankfully I have an older pair (which is even more outdated, but surprisingly I find myself seeing better with this pair!) that I can still use while I

a)look for the missing pair, and
b) check my eyes and order a new pair...

To end this post on a less dramatic note, I'd love to share something I heard on the radio on the way to work. The 2 deejays were discussing about a python that had coiled itself around a patron at a pet shop (this apparently was in the news) and the pet shop owner had begged the cop who came to the rescue to not kill the python because it was way too expensive! Anyway, the DJ's started discussing about how to escape from the clutches of a python if you ever had one that decided to be overly friendly... (the conversation below are the snippets from what I can remember and does not exactly follow the real conversation)

DJ1: I heard from an aunty that if you made the sound of a goat the python will let you go
DJ2: Don't you need to be a ventriloquist for that?
DJ1: Then you'd need somebody else to make the sound of a goat. What if you're alone?
DJ2: Say 'beeak' and point to the other side

At this point I lost all control and started laughing because there was nothing else I could do.
at April 23, 2008 8 comments:

It was ages ago when I watched my grandfather with wide eyed fascination as he fed the fish in my uncle's aquarium. A tiny live prawn had escaped from the bag he was holding and lay squirming on the floor by the aquarium, twitching in what I assumed to be in pain as it could not breathe.

That was also the day that I found out why he never liked eating prawns (well, come to think of it, not really, either because he referred to the squirming prawn as he said "that's why I don't eat them", and I don't seem to be able to connect the dots... perhaps there were not enough dots to begin with)

Anyway, I've always thought that prawns were delicious regardless of cooking method (although I did have a slight aversion towards the curried version) Nevertheless as I grew older (in my twenties) I started noticing that I almost always had to run to the bathroom to throw up within half an hour of eating prawns. And then one day about two years ago, I ended up looking like the nutty professor until I received an injection from the doctor who says that I've had an allergic reaction to something I ate. What did I eat that day? Prawns (I don't know why it's always in the lunch menu during stock take)

Recently, though.. I've noticed that the 'run to the bathroom to throw up' incident occurs every time I have prawns, even if it's only 1 piece. I guess that's it. I'm most probably mildly allergic to it right now although I do have doubts if there is such a thing as being mildly allergic. Who knows what might happen next? One type of food will have to be forever eliminated from my menu. I wonder if my grandfather's reluctance to eat prawns was caused by the same thing...
at April 20, 2008 4 comments:

Email ThisBlogThis!Share to TwitterShare to FacebookShare to Pinterest
Labels: food and drinks, health

DON'T TAKE LIFE TOO SERIOUSLY, YOU'LL NEVER GET OUT ALIVE!!

The title marks the wise words of a second year undergraduate for the benefit of some enthusiastic first years in the yearly year book for our faculty. As I'm too (lazy) pressed for time to do any research, the origin of the said phrase is still unknown.

Email ThisBlogThis!Share to TwitterShare to FacebookShare to Pinterest
Labels: life

I've been away for longer than I like to be away. Of course if I had my way, I'd be around like every single day, but I'm beginning to feel that my own personal time is not mine any longer. Besides the few hours which I use for 'have to do' stuff like eating, sleeping and taking a shower, I find the rest of my time brutally taken away from me by this place I go to daily so that I can earn some $$$. This unfortunately includes Saturdays as well as some Sundays, so I'm left with little time for fun activities like this. And then of course there's also the fact that I'm so mentally and physically exhausted that blogging takes a backseat while I mull over parameters for machines or try to investigate why something has gelled even though it is not supposed to!!

So now, it in the early a.m of a warm Saturday morning. Naturally, I should be catching some sleep as I predict that tomorrow (which is actually today, but more of when I wake up) is going to be a long day... but like I said, I've been away for far too long, so here I am, without something profound to blog about (but hey, when have I ever blogged about anything profound save for a few occasional posts that suddenly decide to make an appearance?), except for the cruel things that life is made of.
at April 12, 2008 5 comments:

If I were to flick memes, this is one I'd definitely flick. I got this off Trav's Thoughts.

If I were furniture I’d be...a comfy couch.

If I were a fruit I’d be...a fridge magnet fruit.

If I were a music instrument I’d be...a guitar.

If I were an element I’d be... Hydrogen?

If I were a lyric I’d be... if only, if only the woodpecker sighs

If I were a music type I’d be...good old rock and roll.

If I were a perfume/cologne I’d be...Hugo Boss for women.

If I were a book I’d be...The Catcher in the Rye

If I were food I’d be...Nasi lemak

If I were a scent I’d be...barely there.

If I were an object I’d be...a scrunchie.

If I were a piece of clothing I’d be...a nice dress.

If I were a facial expression I’d be...a grin.

If I were a cartoon character I’d be...spongebob squarepants.

If I were a geometrical figure I’d be...a pentagon.

Email ThisBlogThis!Share to TwitterShare to FacebookShare to Pinterest
Labels: meme

Took this quiz just because I thought the blog lacked colour

This Page is Rated