Fake Eggs, What Next?

Someone has gone and copied one of the most versatile food ingredient - the humble, but absolutely awesome chicken egg.
You give them a peek at your design, and *3 days later you see a copycat in the market, mass produced and sold at *98% cheaper than you ever meant it to be. They add melamine and nitrates into milk to kill children. They rocked the Olympics opening ceremony when they had the chance, though. And now, eggs...
A few days ago, a housewife brought some eggs to the consumer association after finding something quite amiss with them while cooking, and they were found to be fakes. Now the **whole country is quite worried if they had accidentally consumed the fake eggs (allegedly made of chemicals) without noticing it. I know for a fact that I might probably dismiss the fact that the egg didn't smell like an egg, or had the wrong consistency as just a 'batch problem' if I wasn't aware of the fake eggs story. Who would even think of such a thing as a fake egg?
The thing that bothers me the most is how on earth can people actually have the heart to mess with our food. It's something we take in for nourishment, for goodness sake. I mean, I can understand if you want to use inferior materials and pass it off for a laptop, or make geometry sets that can't be used for more than three months - both true stories, but to mess with food, that's just sick.
* Estimated numbers (please note that I do have the tendency to exaggerate)
** Well, people have been giving tips on how to identify fakes on facebook status updates
News Source: http://thestar.com.my/news/story.asp?file=/2011/4/7/nation/8433857&sec=nation
http://thestar.com.my/news/story.asp?file=/2011/4/8/nation/8437638&sec=nation

OF LAGs and CRUSHED BACKPACKER'S DREAMS 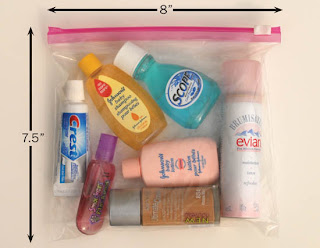 Conversations hardly revolve around airport security, but if they did, and if someone actually wanted to know my thoughts on it a few months ago, I would have vehemently declared that the Liquids, Aerosols and Gels (or LAGs) ban killed the Backpacker's dream. See, airport security hangs on to such a delicate thread that no one in their right mind wants to disrupt that balance and be forever banned from setting their foot in new lands seeking adventure. And because I do not really travel that much (I'll be contradicting this statement pretty soon), I have only a very vague idea on the actual rules and regulations regarding LAGs. They are my travel based nightmares.

For that reason wherever I go, ALL toiletries end up in my check in luggage. Occassionally I'd carry an empty water bottle to refill (some airports have water dispensers at the boarding gate area which is awesome) But even then, a few years ago, while I was on my way back from Japan with an empty bottle in my carry on - I had no intention of refilling it then. I carried it around because it was an actual water bottle and not one of those mineral water bottles, they insisted that I take the bottle out so that they could verify that there was no liquid in it!

A few months back (late October to be exact), my sister and I embarked on our very first journey together (before this it was me and my friends, or her and her friends) While eager to travel light (just with backpacks), we were left with no choice but to get ourselves one checked in baggage for our toiletries (looking back: or so we thought). Seeing that we had 15 kgs of check in, we figured that's we'd evenly distribute the weight from our backpacks. That is how even simple things like a face towel, tissue paper, some basic medication and my cell phone charger ended up in the carry on (on more airport security ambiguousness, a friend recently told me that there was a time when cables were banned from carry ons as well since you could easily use it to strangle someone).

An hour later, as we were looking for a small dull pink duffel bag in the tiny airport's one and only moving luggage carousel, it was nowhere to be seen. We had clearly lost our tiny check in luggage. Just our luck! We lost valuable holiday time as we ran after the airline personnel to lodge a report about our lost 'luggage' as she left us with promises of calling us the moment they found the bag. Naturally we had to get some local toiletries (I totally love their shampoo!) The airline personnel's promise remained only a promise, though. 3 days later, we end up in the airport again after our holiday. When we enquired about our bag (although deep inside, we didn't have much hope of it resurfacing), surprisingly the airline personnel this time said that yes, they had found our bag. 15 minutes later, the sisters were united with the dull pink duffel bag which was then checked in again on it's way to KL. (Kudos goes to airline personnel on our way back as he was very, very helpful)
at April 06, 2011 7 comments:

Email ThisBlogThis!Share to TwitterShare to FacebookShare to Pinterest
Labels: travel

Around 4 years and 1 month ago, I was handed a heartache on a platter in the form of a laptop. To make matters worse, I actually paid for it. It was the very first laptop/computer I ever bought on my own, and I grudgingly have to admit now that I might have been taken on a small ride (they changed the OS from XP to Vista with only 503 MB of memory) without knowing it until at least a year later
A few weeks ago, the laptop suddenly died while I was using it. After fretting for awhile and finally allowing it to 'cool down' it revived and started working again as though nothing had happened. Good news? Maybe. Or maybe not.
Then last night, it went berserk again. My sister was using it for something and she complained that the screen showed her that 'a fatal error has occurred'. She also said that before her laptop died late last year, it had behaved in such a way. Inevitably, the heartache on a platter may have reached the end of it's road.
Undeniably, the idea of getting a new laptop seems tempting enough, especially since it would be tax deductible. At the same time, more modern portable devices (tablets, for instance) have also made inroads, and to be honest, the thought of getting a tablet (an iPad especially) is extremely exciting after I spent about two weeks on holiday with a friend who had one. My only issue with a tablet is that the storage space is quite small for my liking, as for some strange reason, I happen to actually use up a lot of space.
Opinions, anyone?
at April 03, 2011 9 comments: