The three of us weaved our way through the empty spaces between tables and chairs tied with gold ribbon to a table for eight in a far corner of the restaurant, sat down next to each other and burst out laughing.

*Wendy and Kenny decided to have their wedding dinner the very same night a couple of friends and I had decided to have dinner together as we exchanged stories of our lives for the past three months since we were all located in different countries!

So there we were, way before the simultaneous laughter, standing outside the restaurant in our tops and jeans, looking a bit out of place among folks who were dressed in nicely pressed shirts or dresses with shawls draped over their shoulders making their way in. Contrary to our initial assumption that all the tables would have been taken, the hostess informed us otherwise and led us to a table among the six that were not booked by Wendy and Kenny.

Good food and conversation aside, none of us could really keep our eyes away from what was going on in the dinner itself, from the slide show of the pre-wedding photoshoot - we wondered why the bride was dressed in a gown while the groom was in a white shirt and jeans rolled up to somewhere between his ankle and his knee, laughed at the video of the traditional Chinese ceremony held at the house - it wasn't exactly funny, just a bit cheesy, but probably all videos are- because lets face it, we're not professional actors, right down to assuming that the man who belted 3 songs during the karaoke session, with some dance moves was the bride's favourite uncle. RTG offered to sing at ES's future wedding dinner (if and when it happens) karaoke session, to which ES replied that even if she did have a wedding dinner, there wouldn't be a karaoke session (apparently, it's popular, but not a requirement), but she'd get the MC to announce that there would be a special performance from RTG!

In the end, the three of us came to the conclusion that:
a) If you're having a wedding dinner at a restaurant (as opposed to a privately booked hall), just book all the tables so that strangers (especially those like us) will not be able to intrude into one of your most important moments.
b) The loudest table that cheers are most probably the colleagues
c) Wedding dinners are curiously similar to company annual dinners

* These people were total strangers to us. Their names were on the board behind the cake (although ES insists that the 'wedding cake' is not really a whole cake, but just a slice of cake fitted into a mold that resembles the tiered cake!)
at October 25, 2010 15 comments:

A Short Commentary on the *Budget 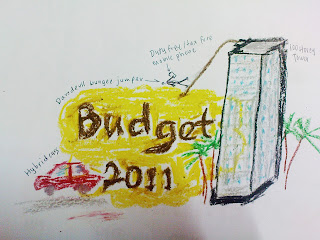 * No I don't have the patience to comment on the whole Budget, unfortunately...
I did a very **grown up thing last Friday by attempting to listen to the tabling of the Budget 2011 on a placidly warm afternoon since I had actually taken the afternoon off from work - not for listening to the budget, though. Well, that is if you exclude the fact that I actually slept off on the floor half way through. I wasn't alone, though. While the PM was tabling the budget the camera zoomed across the room, showing certain people in many different states of sleep or attempted sleep.
But I digress.
The Tourist Friendly Budget
The radio station I listen to on the way to work had previously mentioned the country's concern over tourists not shopping enough here, preferring countries such as Singapore and Hong Kong for such activities. It is perhaps for that very reason bags, perfume and (ahem) imported underwear will be tax free? Oh yes, and there was a pause for applause after the meaningful mention of underwear. Perhaps the spanking new 100-storey tower will pour salt over Petronas Twin Towers' wounds by luring outlets selling these items by the dozen. Good luck to KL folk in handling the traffic jam while the construction is going on.
Of hybrids and mobile phones
An interesting item tabled is the exemption of import and excise duty for hybrid cars. I found that particularly interesting as I had heard somewhere (source: from the back of my mind) that we needed to sustain our petroleum industry and alternative power sources were discouraged - explains the non-existence of solar powered cars for a country that receives 11 to 12 hours of sunshine every single day. Mobile phones too will be exempted from sales tax after this - iPhone, anyone?
So, government babies are more important than private sector babies?
In the past, everyone recommended working in the private sector for various reasons. The government job was more like a last resort or a temporary stepping stone whilst waiting for something better. And then something happened. Anyway, this year's budget tabled an increase in maternity leave for government servants. Nothing against prolonged maternity leave per se, but extending it just for a certain group of people? Screams unfair, eh? (This sadly reminds me of the time I was 14. We didn't have a maths teacher and a geography teacher for two months because they all went to give birth!)
Service tax??
Restaurants charge 5% for government tax, and an extra 10% for service charge (if they serve you which is not always the case - it's good that you don't have to give a tip, or worry that you're not tipping enough or tipping too much, but on the other hand, no matter how lousy the service is, including having the waiter ignore your request for a glass of water after a good helping of tom yam you still have to fork out that 10%) And then earlier there was a proposal to introduce Government Service Tax (GST) which was objected, argued about and finally postponed. I suppose the service tax mentioned here refers to what the receipts label as Government tax - which will be increased to 6% based on this budget.
**mentally grown up, that is. If I grow physically any more, I'm in trouble!
at October 17, 2010 11 comments:

Email ThisBlogThis!Share to TwitterShare to FacebookShare to Pinterest
Labels: Malaysia

I write like
Cory Doctorow
I Write Like by Mémoires, Mac journal software. Analyze your writing!
at October 12, 2010 13 comments:

Email ThisBlogThis!Share to TwitterShare to FacebookShare to Pinterest
Labels: writing

Bukit Gasing (somewhere in August!)
City folk in Malaysia are mostly a deprived lot. Weekends are spent mostly in the air-conditioned comfort of any of the shopping malls, contributing to the economy and the waistline (we love food!), so for those who seek other type of activities, Bukit Gasing seems to be one of the few logical options.


We started the hike slightly after the sun had risen (groping with torchlights in the darkness should probably be left to the pros) It had rained the night before and it was slightly slippery, and occasionally raindrops found their way from the treetops to the top of our hatless heads. The thing about Bukit Gasing is that it has quite a number of trails with different levels of difficulty - by chance, I guess. I found a map on another website, which was helpful but didn't exactly prevent us from getting completely confused (both the sister and I have a bad sense of direction - it runs in the family)


We tried the 200 steps route first, but skipped checking out the observation tower. We'll attempt that on future hikes. Later on we moved downwards towards the route labelled as "Anak Sungai" I was imagining crossing/wading through a knee high river, which turned out to be a miniature brook, bubbling happily along. It was about 3 centimetres deep! The route was pretty alright as it was mostly downhill, And you could see the morning mist obscuring vision a little bit here and there.
As we moved further along, both of us were unsure which way to head to. As we stopped at a spot to check out a map, we encountered a bunch of people. They probably sensed that we were new there (the map being a big giveaway, I suppose) and asked if we were looking for the way out or in. Naturally as it had only been a short while, we wanted to explore the other routes and said in. The lady pointed out the route she wanted to take and asked if we'd like to follow them. It was an uncomfortable decision to make, but we said yes anyway.
Yay for good samaritans!
Our good samaritans led the way out into a safer, more popular route. According to them, the route we seemed to be heading to was slightly dangerous, as only earlier this year there had been an incident. We passed by several interesting spots including old abandoned housing when Bukit Gasing was a rubber plantation. There was also lovely smelling mangrove pandan leaves which reminded me of nasi lemak as we climbed up the hill!


We parted ways with the good samaritans a little while later after they had led us to the intersection which either leads us out or towards other trails. The sister and I decided to explore even more and we took the trail towards a suspension bridge. We crossed over to the the other side of the hill and went on climbing.

By this point, the  map once again seemed to have lost all relevance as we could not gauge where we were - after all, the map was a rather simple one, drawn by someone who goes hiking there on his website (see link attached above) We suspect, we had entered the area marked as the unknown track. Someone must have known about it, though... seeing that it had wooden steps to prevent enthusiastic hikers from slipping and falling down. However, after torturing the quads, for like what we felt as forever - (actually, it was only about 30 minutes!) we finally reached the exit.


And in typical Malaysian style, after all that hiking, we drove back to our area and had a big, wonderful hearty breakfast of chicken char siew rice.
at October 03, 2010 6 comments: