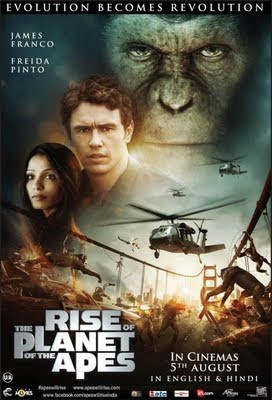 SPOILER ALERT!!! I'm rather convinced that what I'm about to write in the following paragraphs will include bits and pieces of spoilers from the movie Rise of the Planet of the Apes, so unless you want to know what happened or just couldn't care less, kindly click the X on the tab that accommodates this page and check back in a week for something else - if you want to, that is. Otherwise, I hope you enjoy my less than thrilling take on the movie.
For some reason, fictional scientists are occasionally depicted as deranged and the kind that are out there to destroy the world as we know it, although that is not the case here. In fact, we have an extremely good looking scientist (James Franco! Yum!) who invents the cure to Alzheimer's - a good intention, no doubt, with the exception to how it's carried out in the lab he works in - animal testing, which may seem as an indirect subject approached by the movie - or so I see it.
However, as experiments are apt to get, something goes terribly wrong, and that's only the beginning, but also the premise of the movie. I recall being riveted to my seat in the beginning scenes when one of the apes literally went ape because the scene was way too realistic. Turns out she had a bundle of surprise for our scientist, in the form of a baby chimp who had the Alzheimer's cure passed on to it, resulting in remarkable intelligence. You also find out why a cure for Alzheimer's is important for the scientist.
Naturally, as all movies go, things take a bad turn all over again, and quite terribly!
And here, you learn that it's not the scientist who's the bad guy, but more so the corporation he works for, in the name of greed, where ethics are tossed into a bin. In fact, looking back on this movie, you realise how terrible human beings are, from the way we treat fellow human beings, to the way we treat other animals for instance, so who can blame the apes for deciding that they have had enough of humans and want to be just left alone? And they did this without intentionally injuring anyone more than they had to, except for this man called Jacobs (Here's a small (and lame) joke - at one time, during the second wave of testing, they brought in an ape called Koba - creepy looking fella, though, who seemed to have a fondness for cookies. After he had been exposed to the Alzheimer's cure, he actually wrote out the word "Jacobs" on the touchscreen, and I actually thought he was referring to this -> Jacobs - the brand of the cookies!)
It makes you question things about animal testing, drugs  and cures for diseases, how wild animals in captivity are kept, the relationship between us and those animals, and actually how strong and scary wild animals can be and many other such things
I found the movie enjoyable and was incredibly glad that I watched it, what with the awesome effects and all. It's also good that they had decided to not use human actors to play the roles of the apes, because it's much more realistic this way. In fact, I enjoyed it so much that I can't wait to see what happens next as they ended this movie with two future possibilities.
at September 01, 2011

Email ThisBlogThis!Share to TwitterShare to FacebookShare to Pinterest
Labels: movies